Imbalance in Vata, Pitta, Kapha can be brought by various reasons.

Tamaka Shwas is a chronic inflammatory condition of the lung airways resulting in episodic airflow obstruction. This disease is more predominant in children and aged population.

The parallel disease entity in contemporary medical science to this disorder is Bronchial Asthma.

According to modern view symptoms of bronchial asthma are caused by an inflammatory reaction within the bronchial wall involving many cells, mediators and cytokines.

Due to increased Kapha dosha, Strotorodh (blockage in smallest channels carrying 3 doshas and 7 dhatus – elements) occur in Pranvaha Shrotas (blockage in the channels of respiratory systems).

Due to this blockage, natural direction of the flow of Vata is blocked and it starts flowing in reverse direction, which is known as Pratilom Vayu. 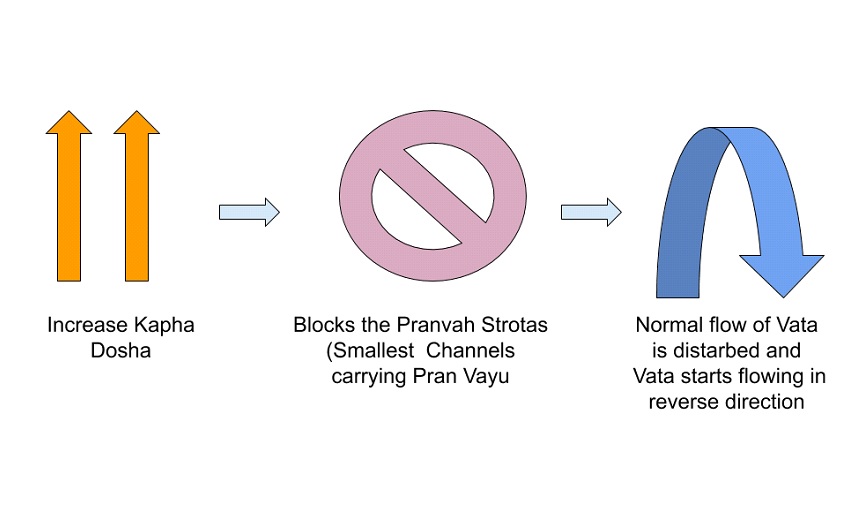 Removal of causative factors for Allergic Respiratory Diseases are as follows

The diet is an important factor in the prevention and treatment of the Allergic Respiratory Disease. At our Ayurvedic Panchakarma Centre at Undera, we serve freshly prepared Ayurvedic diet. Prepared according to your constitution, this diet helps in detoxification and balancing of the three doshas.

Panchakarma therapy is a combination of five procedures, which detoxify the body and balance the three doshas (Vata, Pitta, Kapha).

You can take the Panchakarma therapy in-house at our Ayurvedic Health Centre at Undera, Vadodara.

Alternatively, you can also take the Panchakarma therapy on OPD Basis (without lodging and boarding) at our Ayurvedic Panchakarma Clinic at Race Course Circle, Vadodara.